In the case of Paul Ki 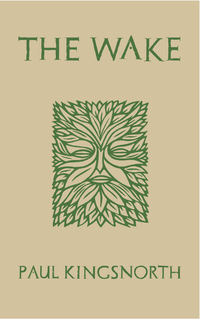 ngsnorth’s extraordinary first novel, The Wake, which has been long-listed for the Mann-Booker prize, the effort is most definitely worth the reward.

One of the most unique and fiercely beautiful novels written in any language.

Set during the Norman invasion and occupation of England in 1066-68, the book is written in a “shadow-tongue”, the author’s imagined amalgamation of Old and Modern English, which proves slow-going for the first several pages and may scare off all but the most intrepid of readers. Which is a shame—the readers’ shame, not the author’s—because they may prematurely close the covers of one of the most unique and fiercely beautiful novels written in any language.

So the first rule of reading The Wake is to persist. After only a few pages the foreign yet familiar words settle into the mind and once there sprout and grow until the pages are alive and teeming with the voice of the peculiarly antagonistic protagonist, Buccmaster of Holland. A socman (an upper-crust farmer, a minor landowner) of the fens of eastern England, Buccmaster is a man forged in the upheaval of the French occupation, a man of his time who has lost everything and carries within him a fire and hatred of all things foreign.

He is at once proud and fierce, vain and detestable, and quite possibly delusional—an unlikely (unlikeable) candidate to hold center stage, yes, but just try and look away. The sheer momentum of his tale, the poignant urgency of his impassioned ranting, is impossible to deny. Kingsnorth has created in Buccmaster as flawed and human a central character as has ever before been written, and one that speaks with a voice that grabs the reader by the throat and refuses to let go. The second rule of reading The Wake then is to remember to breathe.

The third and final rule is to wonder how in the hell, in all the eald gods and the new, Kingsnorth did it.

View my Flipboard Magazine.
Follow The Rough Draft on WordPress.com

One Word at a Time

"A Word of Substance"

Jon Chaisson and His Obsessions with Music and Writing

Travel writing and long form non-fiction narrative from the road

Aspiring Author of Romance Blogging the Process and Her Progress

clawing at the keys

Writing Stories of Love, Faith and Happy Endings While Enjoying the Journey

Notes on a life

Thoughts about writing and life

The Writing Life at Middlemay Farm