The use of dialect to convey accents or regional argot in fiction is one of those issues that seem to polarize writers and readers both. Many of the so-called experts, preaching from behind their pulpits, will slam the gavel at the mere mention of such parlor tricks in prose, and yet, the more I read the more I realize that the books and authors I most admire are the ones who aren’t afraid to splash their pages with apostrophes and hyphens, and ask their readers to do a little more work.

So how does an aspiring author approach such a minefield without losing a proverbial leg? The ready answer would seem to be very carefully, with delicacy, and perhaps a soupçon of skill, or not at all.

The late great Elmore Leanard, in his oft-quoted advice for writers, states in his point #7:

USE REGIONAL DIALECT, PATOIS, SPARINGLY.   Once you start spelling words in dialogue phonetically and loading the page with apostrophes, you won’t be able to stop.

I don’t disagree with Leonard, not completely, anyway. There does seem to be an avalanche effect with the technique, where by shortening just one “ing” word to “in'” necessarily means all the others that character speaks also have to be truncated to remain consistent. Across an entire novel? You can very quickly build to an apostrophe apocalypse, and your editor may well douse your manuscript in gasoline and self-immolate.

And then there are the regional sensitivities to consider – when you employ dialect for hillbillies, or Scots, or non-native speaking accents, there will be readers who may be insulted, or feel the implied bastardization of their manner of speaking is derogatory somehow, whether the author intends it that way or not. By writing dialect the author is allowing the reader to draw conclusions about the character before they are even fully introduced (not always a bad thing – characters written with dialect that defy those preconceived notions can be particularly effective).

Yet, regardless of al 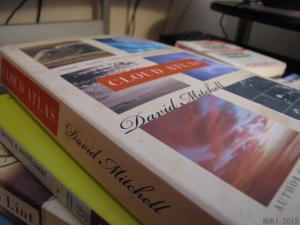 l these dangers, there are readers (myself included) who relish the added effort of parsing out a phonetically spelled colloquialism, if it is done well and adds the right flavor. The caveat being: if it is done well.

One effective example of the technique that comes to mind is in Cloud Atlas, by David Mitchell. Consider the following passage, the opening paragraph of a section set on an island in the distant future after a catastrophic nuclear fallout, where the language has morphed and evolved over centuries of isolation:

Old Georgie’s path an’ mine crossed more times’n I’m comfy mem’ryin’, an’ after I’m died, no sayin’ what that fangy devil won’t try an’ do to me… so gimme some mutton an’ I’ll tell you ’bout our first meetin’. A fat joocesome slice, nay, none o’ your burnt wafery off’rin’s…

In only a few lines the inventive and oddly familiar language sets the tone for the coming story, and almost becomes, in and of itself, a character. Written without dialect the piece would fall flat, hemmed in by the limits of proper prose. Of course, we don’t all possess Mitchell’s remarkable talent for sounding out the irregularities of speech. So how should we lesser beings approach the technique? With fear? Should we cower from it simply because it is more difficult, both to write and to read? Or because it is fraught with danger? That depends.

For every reader who enjoys the labor there as many or more who find the technique jarring and amateurish, serving only to break the carefully woven spell of the narrative. These readers don’t want to work; they want the story to work for them. And they are perfectly within their readerly rights to demand what they want from their fiction. There’s an awful lot of it out there, and if they don’t like yours they will buy someone else’s. Fair enough. Add to that the fact that even those readers who do appreciate reading dialect will also enjoy a story without it, and we see fairly quickly that it is safer to avoid it altogether; that you may alienate potential readers simply because you couldn’t resist that cute and curly apostrophe.

So, there is one answer. As a beginning author, with exactly zero fans, there is a valid argument to be made for not pissing anyone off before they become one. No one would blame you; hell, no one would need ever know you were a closet lingo-lover, a patois-pervert, an idiot-for-idioms. Your secret would be safe.

Some of us don’t like safe. It makes us squirm in our seats and fidget; bark profanities. There’s nothing remotely safe about wanting to spend a life writing in the first place, is there? And yet here we are.

I say, if you’re drawn to the technique, if you enjoy reading it and want to practice yourself (that soupçon won’t come easily!), then why the hell not? If you want to dabble in some dialect, go right ahead. Screw the soap-box preachers and effete academics, and follow your gut. Dare to slang it up, if that’s what you like. Confect the hell out of that page with some rogue punctuation, and let the naysayers thumb their noses and huff and puff until they choke on their blasted rules.

It’s only by experimenting that we see what works, what is too much. It’s okay to make a mess of a story as long as you learn from it. So go find your apostrophe epiphany! If it sucks, so be it. Put the “g’s” back in and carry on.

Language is meant to be played with, molded and made to do our bidding, not kept in a glass case and admired, unaltered through the eons.

Write for you, and chances are someone out there will enjoy what you’ve written. You will, at the very least. And me. I’ll probably dig it too.

Thoughts? Any other great examples of dialect in the books you have read? Any you’ve come across that you hate? Please share!

View my Flipboard Magazine.
Follow The Rough Draft on WordPress.com

One Word at a Time

"A Word of Substance"

Jon Chaisson and His Obsessions with Music and Writing

Travel writing and long form non-fiction narrative from the road

Aspiring Author of Romance Blogging the Process and Her Progress

clawing at the keys

Writing Stories of Love, Faith and Happy Endings While Enjoying the Journey

Notes on a life

Thoughts about writing and life

The Writing Life at Middlemay Farm